According to legend, the composer Franz Schubert, the great master of romantic music, composed his world-famous song “Der Lindenbaum” in the Höldrichsmühle, in the shade of an old linden tree. The song forms part of the cycle “The Winter Journey”.

According to legend, the composer Franz Schubert, the great master of romantic music, composed his world-famous song “Der Lindenbaum – am Brunnen vor dem Tore” in the Höldrichsmühle, in the shade of an old linden tree. The song forms part of the cycle “Winterreise”.

Between 1820 and 1826, the famous Austrian composer and his circle of friends stayed at the Höldrichsmühle time and time again. You can enjoy the same natural beauty they enjoyed while hiking in the woods all around our hotel. 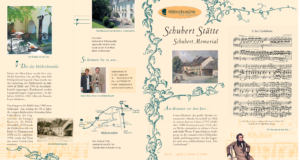 Höldrichsmühle is one of the oldest buildings on the connecting road between Heiligenkreuz and the Heiligenkreuzerhof in Vienna, which was first documented in 1210.

In the eventful ups and downs over the centuries, the purpose of the Höldrichsmühle also changed. Originally dedicated to the management of the vineyards, it later became a mill and was granted a restaurant concession at the end of the 18th century.

At the turn of the 18th to 19th century, the Höldrichsmühle became a popular destination for the Viennese.

Over time, the rattling of the mill stopped due to industrialisation. Towards the end of the Second World War, the Höldrichsmühle was severely damaged and in the post-war period Eva and Ernst Moser rebuilt it into a popular restaurant.

The famous Austrian painter Ferdinand Georg Waldmüller was often a guest in the Höldrichsmühle and immortalized the house in several pictures:

In the 1990’s, the hotel and restaurant was expanded under the management of Erich and Irene Moser and today offers modern facilities paired with the charm of a former mill inn.

FROM THE MILL TO THE INN

The Vienna Woods have always been a magnet for many people who worked in Vienna and found relaxation and inspiration in the beautiful area surrounding the former imperial city of the Habsburgs.

In 1786, the Höldrichsmühle was officially designated as a “tavern”. Since then, in addition to the economic activity as a mill, guests have also been entertained.